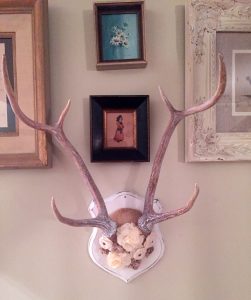 One of the reasons I find garage sales so fun, is because you truly never know what little gem you’re going to come home with. I went to a garage sale late in the morning, expecting to find that all the good stuff had sold. I was right. All that was left were the usual junky items and a few pairs of old antlers. They were dated and ugly I wasn’t sure what I would do with them. As I was pondering the purchase, my husband whips out his wallet and pays for the set – didn’t even haggle! “Great,” I thought. “I am the proud new owner of a set of furry antlers wearing a diaper.”

I texted this picture to my sister with the caption, “If antlers wore panties”. She thinks that sounds like a great name for a children’s book. While she is working on that, I decided to replace the undies with something a bit more creative and updated looking.

I also googled how to remove velvet from antlers and didn’t find anything! Surprising! But I did find how to remove fur from the skull cap. All you do is put it in a fire ant hill for a couple weeks. The ants eat all the skin and fur and leave it clean as a whistle. Delicious.

While my fire ants were feasting, I set to work on the other pair of antlers.

Here’s the “naked” shot, after I had removed its underwear. The previous owner had put a wood varnish on the antlers that made them a bit shiny and brought out a deeper brown color that I didn’t care for. I rectified that by simply whitewashing them.

I also painted the board white and wrapped the skull in burlap. Then I added a few flowers to give it a vintage look.

My antlers were done and looked amazing! Now I was pumped and ready to give the furry set a makeover too!

While I waited for nature to take its course, I proudly told my husband that the furry antlers were out back in an ant hill. He about had a heart attack! Apparently antler velvet is a good thing – who knew? It makes this particular set of antlers rare and the reason why he was so excited to buy them in the first place.  Whoops!

I ran out in the pitch black night with a flashlight and gloves, and rescued the antlers before any harm had been done. I had some angry fire ants, but my velvety hide was safe!

On second thought, I see why Chris was so excited about the velvet. It really is beautiful.  I wanted to keep the base simple since the antlers are what you want to focus on. I added basic burlap and twine, and painted the board with white chalk paint.

The third and final set of antlers got white-washed as well. It has a clean, wintery look to it that I love. I wrapped the skull in twine then mounted it to the painted board. In gold metallic I wrote Psalm 42:7, which is…

As the deer longs for streams of water, so my soul longs for you, O God.

I felt like these antlers needed a little gold metallic somewhere, someway. So I pulled out the trusty washi tape.

Washi WHAT? You don’t know what washi tape is? It’s this crazy cool tape that is completely addictive. You truly can’t stop using it! You put it on one thing and all of a sudden you feel transformed into Martha Stewart. Now you’re a crafting genius wandering around the house washi taping anything that doesn’t run away from you!

What were we talking about again? Oh yes, antlers…

To visit these beautiful antlers in person, along with other unique finds, check out Timeless Interiors at the Grapevine Antique Market. It’s always a good idea!